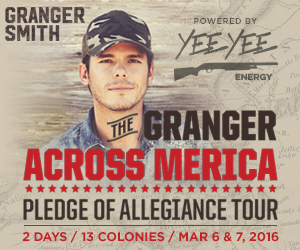 Chart-topping country artist, Granger Smith, announced today that he will embark on a rigorous, 2-day tour to further acknowledge his love for our country. Coinciding with the upcoming release of his new album, Remington (March 4 via Wheelhouse Records), the campaign, “Granger Across Merica Pledge of Allegiance Tour Powered by Yee Yee Energy,” will allow Granger to visit and recite the Pledge of Allegiance at each stop at all 13 original colonies plus Washington, DC on March 6 and 7, 2016. Visit geni.us/pledgeofallegiancetour for more details.

"I've always felt compelled to voice my love of this country," said Granger. " My granddad and so many countless others have fought for our freedom. That freedom allows us as Americans to pursue our dreams and I am proof they can come true. I feel blessed to have a platform that may inspire others to remember what this nation was founded on. I hope folks will join me in reciting the Pledge of Allegiance as a symbol of our thanks for those who defend our God-given rights."
​
Immensely patriotic, Granger has always strongly supported our U.S. military men and women. He personally founded the 100-Mile Boot Walk to raise awareness surrounding the challenges and needs our troops face upon returning home and has benefitted the 501c3, Boot Campaign. He has also performed several shows overseas for our troops. Granger’s popular country boy alter-ego, Earl Dibbles Jr., is also extremely vocal about the cause and is well-known for his love of “Merica.” Earl Dibbles Jr. even pays homage to our great nation with his brand new song, “Merica,” featured on the new album. View the music video for "Merica".

“Granger Across Merica Pledge of Allegiance Tour Powered by Yee Yee Energy,” is built into Granger’s album release week activities, which also include appearances on the Today Show, Fox & Friends, AOL Build, KTLA and more. Most recently, Granger celebrated his first national No. 1 with “Backroad Song.”

​FOR FULL SCHEDULE, WHICH INCLUDES ALL ADDRESSES, PLEASE VISIT: geni.us/pledgeofallegiancetour​